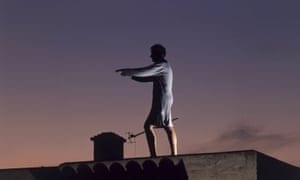 All is still– except for the beating hearts of the living.

Darkness is nothing abnormal at this time of night. There appears to be a specific 12 hours dedicated to darkness. A time where one’s true colours are shone upon. A time where one is exposed to others in a seemingly endless slumber with no control over his actions. Until it happens.

Most people here sleep with their doors open. It’s not like someone would come in and rob anything. There’s nothing to rob here. Besides, almost every house has some sort of defense line up. Some sort of weapon crafted with the wrong intentions. It’s the norm. Some sleep outside on traditional beds. These are wooden frames with stylistic legs, topped with woven fabric. No one needs a mattress. No one needs the comfort of a mattress. It’s not like it would do anything to stop it from coming.

He pushes the blanket away with his feet, and sits up. His posture seems manufactured, it’s too perfect. He turns to the side of the bed, steps one foot, then the other. He has no choice. His intellectual mind can’t save him or his brother now. His body is controlling his actions. He has been predestined to submit to this truth.

He uses his hands to push up against the bed, and steps one foot in front of the other. Not that he knows what he’s doing. He moves with such intriguing, charismatic grace that one doesn’t want to think of this as unfair.

It’s unfair that his body is doing the walking, and his mind can’t do the talking.

The brother lies asleep on the bed outside. His sound snores accompany the breeze in conversation, breaking the status quo of silence on that particular night. The brother is unaware of an upcoming interruption.

He moves some more, steps still taken with such superficial movements, not a single twitch. He moves toward his brother, making some faint grumbling noises. This is what cuts the conversation.

His brother is startled, and his unconsciousness is wearing off. The brother rubs his eyes and finds him in front of him. Standing. Eyes closed.

“Brother?” he calls, his stream of natural consciousness rushing back at the sight of him. He takes no notice of his brother, and instead bends down, it seems as though he is reaching for something.

“What are you doing?” Dumbfounded, the brother oddly finds that the uneasiness from this sight settles with one-sided conversation. He is reaching for the weapon hidden underneath the bed. A weapon invented to kill.

He picks up the gun, grasping it tightly in his fingers. His knuckles turn white.

“Brother! What are you doing?!” the brother calls out to him, urging him to wake up and break this spell. Instead, he turns the gun over in his hands. He points the gun in the direction of his brother’s head. The brother starts crying. He’s helpless. If he tries to touch him, it’s possible his chapter would be over. The brother starts praying. Praying that this unlikely turn of events will end, and this nightmare will stop.

As if on cue, he tilts his head up. He lowers the crafted weapon to the ground, and slides it under the bed. Where it belonged. No one else would know this happened. He turns back the direction he came, back to his sleeping chamber. He slides back in bed.

The brother will now forever be trapped in fear when sleeping at night. Night equates to darkness. Darkness is a time where one’s true colours are shone upon.

At last, the darkness ceases. At the breakfast table, the brother looks traumatized, as if he was up all night seeing a ghost haunt him before his very eyes.

“Are you okay?” he asks, “You look like someone tried to kill you or something.” He chuckled.

“No, I’m NOT okay! You tried to kill me last night, and you’re just going to pretend it never happened?!” the brother seems like the crazy one here.

“You probably just saw a bad dream, or something. Now stop talking, and eat up.”